Oh my goodness - I could fill an entire library with historical pictures, I'm such a history geek!!
It's taken me all week but I finally decided on this one ... 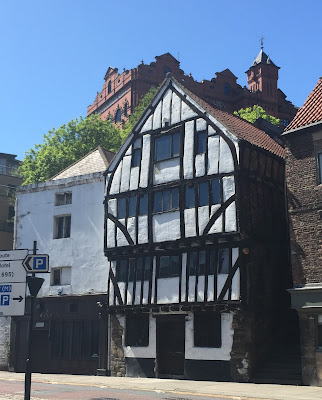 This is the "Cooperage", one of the oldest buildings in Newcastle and has a great history..

I've always known it as a pub, which my Dad used to drink in occasionally (sadly, I've never actually been inside).

The first storey of the Cooperage was built back in 1430 - the ceiling timbers supposedly came from a Dutch merchant's ship that had sunk in the river Tyne which runs opposite the building.
Due to the close proximity of the old town wall at the foot of Castle Hill, there was no room to extend out so they went up and a new storey was added every century or so.

In 1531 the building was granted to the merchant Thomas Horsley and was then occupied by generations of prominent merchant families until around 1742.  Records show that silk dyer Mr J Robinson bought the building in 1841 but by 1853 it was listed as a grocery store.

In 1863 an established cooper (barrel maker) moved into the building.  Barrel making was big business as they were used were used to transport all kinds of goods from the river: beer, wine, butter and fish.  John Arthur Cooper bought the building in 1876 and carried on the barrel making business.  6 generations and almost a century later, the family moved the business to Ponteland and in 1974 it became a pub.

Long since closed, archaeological digs have taken place inside and pottery from the 14th and 15th century has been found along with Roman pieces.

As with most old buildings, it's said to be haunted.  One particular tale is that the ghost of a sailor who was nailed to a side door for attacking maid on the Long Stairs and he is still said to pound the door to this day 👻

The steps running up the side near the bottom right-hand are known as the "long stairs" which managed to survive the Great Fire of Newcastle in 1854 and they lead up to the castle keep.
The building next door (on the right) is the Michelin star restaurant House of Tides which is a fantastic place.

I love history, especially in my beautiful city so I hope I haven't bored you!! X

Thank you for your comment, it's always good to know what people think of my adventures and crafty stuff :o)

thanks for popping by :)
My name is Hayley and I live with my cuddly ginger cat Mr Weasley in a lovely village between Newcastle and Northumberland.
I've always been creative and am forever flitting from one craft to another and sharing my makes here.
I love to travel when the opportunity arises and this goes hand in hand with my obsession for taking photos!
Everything stops for just one thing - rugby.